Previous
Next
Previous
Next
Special Global Event
Join us on March 29, 2021 at 8:00 AM PDT for a unique digital worship and prayer experience with Pastor Rick Warren and church leaders around the world!
Watch in:

Easter is a time to praise God and celebrate the resurrection! And this year, more than ever, as our world has faced a challenging year of a pandemic, social and political unrest, and losses big and small, I can’t think of a better time to come together in prayer for our churches and communities, reflecting on Jesus’s redeeming work on the cross.

Last year, for the first time due to the pandemic and social distancing, we moved our annual Pastor Prayer Gathering to a global online event to rally hundreds of thousands in prayer around the world. It was a special time of seeing God move powerfully through the prayers of his people. I want you to be with us this year!

Join me and other pastors from around the world on March 29th at 8:00AM PDT for our Easter Pastor Prayer Gathering.

At this special global event, we will gather online to unify and encourage one another in prayer and worship. There’s no denominational, political, or organizational agenda for this event. We simply come together as the Body of Christ.

Jesus said the world would know we are his followers by the way we love one another. Let’s encourage one another and rejoice with other leaders online as we worship our risen King and Savior! 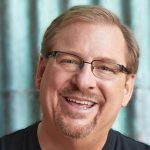 Other Places to Join In

As the founding pastor of Saddleback Church with his wife Kay, Pastor Rick Warren leads a 30,000-member congregation in California with campuses in major cities around the world. Saddleback Church has more than 300 community ministries to serve groups including veterans, single parents, orphans, prisoners, addicts, and those living with a mental illness.

As a global strategist, Pastor Rick advises leaders in the public, private, and faith sectors on leadership development, poverty, health, education, and faith in culture. He founded The PEACE Plan to address five global issues—spiritual emptiness, self-serving leadership, poverty, disease, and illiteracy—through the power of ordinary people in the local church. He also leads the Purpose Driven Network of churches, a global coalition of congregations in 164 countries. More than 500,000 pastors and priests have been trained worldwide.

As a leader, Pastor Brian Houston is highly regarded for his boldness, innovation and vision. As a church pastor, he is well respected for his passion for the cause of Christ and the local church, and for preaching messages that change mindsets and ministries. But at HOME – Hillsong Church – Pastor Brian is most loved for being the ‘dad of the house’ – a pastor who loves God and people, and a speaker of life who declares, ‘The best is yet to come’.

Rev Tony Yeo is the Senior Pastor of Covenant Evangelical Free Church. His passion for investing in the future generation through disciplemaking and mentoring is witnessed in the 28 years of his faithful leadership.

Pastor Tony has been serving as the youngest General Secretary of the Evangelical Fellowship of Singapore (EFOS) since 2006 and the Executive Secretary of the Global Day of Prayer (GDOP) in Singapore since 2008, which culminated at the Jubilee Day of Prayer (JDOP) in 2015 where 51,000 Christians gathered at the new Sports Hub. He is also the Executive Secretary of Celebration of Hope held in May 2019, which united the Body of Christ in Singapore to proclaim Jesus Christ, the One Name who gives solid hope to those who believe in Him.

Pastor Tony released his first book – Leading Beyond the Second Chair – A Certain Kind of Leadership in 2012. He graduated from Singapore Bible College with a Bachelor of Theology with Honours and also holds a post-graduate Diploma in Spiritual Formation from Tyndale Seminary, Toronto. He is married to Choy Mei, and together they have two sons, Timothy and Noah. His eldest son, Timothy Yeo, is now pursuing his Masters of Divinity (MDiv) at Trinity Evangelical Divinity School (TEDS) in Chicago, US.

The Life of a Christian Servant-Leader

For many Christian leaders, the path that leads them to their appointed roles is often paved with faith, trust and courage. Such is the case with the Rev. Dr. Laurent Mbanda. Dr. Mbanda was born in Rwanda and raised in Burundi, where he lived until he was 20. From that age onward, he embarked on an unforgettable voyage. In fact, by the time he was 30, he had lived and served in 18 African countries. This was only the beginning, however, for a man who would soon enter a world of international and Christian service, which would propel him to serve in various roles of authority, ultimately leading to the Anglican Church in Rwanda.

His professional and spiritual background can be traced to the time he accepted Christ into his life. Though he prayed many times to receive Jesus — in some cases just to win the approval of missionaries offering services and goods — it was not until 1970 that he had a “real” encounter with God. That’s when he rededicated his life to Christ and began feeling God’s desire for him to make it his life’s purpose to care for people in need. Dr. Mbanda acted on this instruction, and began his career in holistic ministry to the poor, children, widows and orphans. He also always had a special interest in the development of clergy and lay leaders. To this day, Dr. Mbanda says he loves seeing people come to Christ. He also loves to plant churches and help them grow so they can truly become the “light and salt of the earth.”

Dr. Mbanda’s work in full-time ministry began in 1981 when he served as the Country Director in Burundi with Campus Crusade for Christ. Four years later, he went to the United States for graduate school, during which time he became Director of the African Fellowship Ministry at International Students Inc., based in Colorado Springs. In 1990, Dr. Mbanda moved to Virginia where he served as the Africa Director for Christian Aid Mission, working with indigenous missions. Then in 1991, Mbanda and his wife, Chantal, founded Christian African Leadership Ministries, Inc., in Charlottesville, Va. The ministry aimed to provide leadership skills to Christian leaders on the African continent as well as vocational and operational training.

In 1993, Dr. Mbanda joined the Compassion International family, serving in various roles, including Associate Area Director of Program, Senior Program Development Specialist, Child Ministry Program Development Director, Vice President of Program Development, Area Director for East Africa, and his current position as Vice President of Africa Region. In 2004, after spending 21 years in the United States, Mbanda and his family returned to Africa. They currently live in his homeland of Rwanda, where he and his wife, Chantal, continue to care for orphans at the ministry they founded, called New Hope Homes.

From an academic and professional perspective, Dr. Mbanda is a graduate of Kenya Highlands Bible College. He completed coursework for his Master of Arts in missiology from Fuller Seminary’s School of World Missions. In addition, he has a Master of Arts degree in Christian education from Denver Seminary, and a doctorate from Trinity International University in Deerfield, Ill. In 2003, he was named as a member of the International Who’s Who of Professionals.

Dr. Mbanda’s extensive background in ministry and international nonprofit work has given him an experience that is parallel to few. His work representing organizations at high levels combined with his strong sense of business and commitment to corporate objectives have propelled him to serve in various roles of leadership and authority. In addition, due to his many connections and relationships with international and respected nongovernmental organizations (NGOs), churches, Christian organizations and nonprofit groups, he is considered by many an expert in ministry, business operations and development.

On a personal note, Dr. Mbanda and his wife Chantal have been married more than 25 years. Chantal is Director of New Hope Homes. The couple has three children: Erica, 24, Eric, 22, and Edwin, 19. Erica is a graduate student majoring in psychology while working full time at Compassion International. Eric, who is pursuing acting and sports medicine, lives in Hollywood, Calif. Edwin is a sophomore in college, where is majoring in business and plays basketball. The family quotes Joshua 24:15 as their guiding Bible verse: “As for me and my household, we will serve the LORD.”

Nicky and Pippa Gumbel lead HTB Church, the largest church in the Church of England. They are pioneers of the Alpha course, an introduction to the Christian faith now running in tens of thousands of churches of all denominations in 160 countries. They also write a daily online commentary, the ‘Bible in One Year’, which is read by more than three million people every day. They have three children.

Bishop T. D. Jakes is a charismatic leader, visionary, provocative thinker, and entrepreneur who serves as senior pastor of The Potter’s House, a global humanitarian organization and 30,000-member church located in Dallas.

Named “America’s Best Preacher” by Time Magazine and CNN, Jakes’ voice reverberates from the world’s most prominent stages from the White House to the Aspen Institute to Nasrec Expo Centre in Johannesburg, South Africa.

Beyond the pulpit, Jakes’ worldwide impact is also felt through high profile conference series such as MegaFest which recently drew tens of thousands to Dallas in June 2017, world renown “Woman Thou Art Loosed” which sells out at every appearance and the standard bearer for ecclesial learning, the annual “International Pastors & Leadership” conference.

A new model for the 21st Century Renaissance man, Jakes is a committed philanthropist who gives back on an ongoing basis to the communities that he serves worldwide.

As a business leader, his media and entertainment empire spans film, television, radio, music and best-selling books, and includes an award winning music label and a self-titled talk show that aired nationally in 2016. Viewers may now capture his ‘behind the scenes’ essence in a new subscription-based platform called “Bishop’s Village.”

Among his trademark films are “Miracles from Heaven,” the follow up to “Heaven is for Real” and a made-for-TV-film, “Faith under Fire” which aired recently on the Lifetime network. Jakes is a New York Times bestselling author of three top tens: “Instinct,”“Destiny,” “Soar,” the newest entrepreneurship-focused title and latest release in 2019; “Crushing; God turns pressure into power.”

Married to Serita for more than three decades, he is the father of five and a proud grandfather of eight.

Carlito and Leila Paes are the lead pastors of the City Church in São José dos Campos (Brazil) and founders of the Purpose Driven Ministries Brazil and the Inspire Network of Churches with over 600 associated churches.

Before the Purpose Driven movement, the church had about 600 members and today is a thriving multisite community with over 20,000 members and 20 planted churches in different parts of Brazil as well as over 30 new churches being planted. Its main campus has over 70 acres with areas dedicated for sports, education and simultaneous celebrations. The City Church is responsible for many ministry organizations in the fields of Education, Communication and Social Aid.

Carlito and Leila are part of the Global Kingdom Partnership Network (GKPN) in global instance. Carlito Paes is a lecturer and author of 28 books and holds a Bachelor and Masters Degree in Theology. Leila Paes has a Bachelor Degree in Psychology and Christian Education and is finishing her Masters in Counseling at Nyack College (NY). The couple has 4 children and lives in São José dos Campos since 1997.